This May, CCAF and our international program partners celebrated the graduation of the 2015-16 Fellows. At a ceremony in Ottawa, we came together to congratulate the Fellows and thank the audit offices that hosted them for their nine-month Fellowship placements. 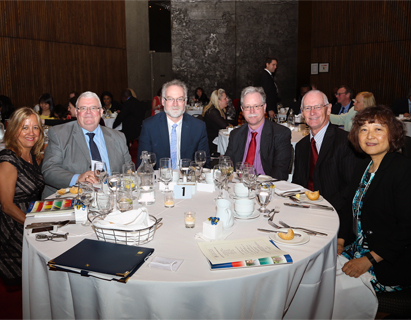 The graduation ceremony brought together many program partners to celebrate the Fellows' accomplishments. Representatives of the OAGs of Canada, British-Columbia, Alberta and Québec, Global Affairs Canada, the high commissions or embassies of the Fellows' countries and the CCAF Board of Directors all attended.

It was a fun but bittersweet evening. The Fellows were happy to have graduated and to be returning home, but sad to say goodbye to their Canadian colleagues and the many friends they made during their stay.

CCAF and the Fellows thank the four host OAGs, our funding partner, Global Affairs Canada, and all those who made the 2015-16 Fellowships a success!

Friend of the Fellows Award

This award recognizes partners who play a significant role in the CCAF international program and who go above and beyond to make the Fellows' experience both educational and enjoyable. 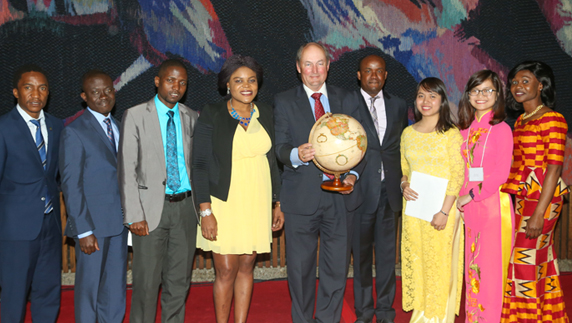 This year, CCAF and the Fellows presented the award to Michael McLaughlin. For the past ten years, Mr. McLaughlin has been a valued Associate at CCAF, where he has travelled abroad for the international program many times and has delivered training in Canada to the Fellows for several years. This past year, Mr. McLaughlin taught the Fellows' course on planning a performance audit and was involved in coaching all eight Fellows on the development of their audit plans. In presenting the award, the Fellows said they "feel fortunate to have learned from him," and that "his feedback helped us to produce projects we feel confident presenting to our Auditors General when we return home."