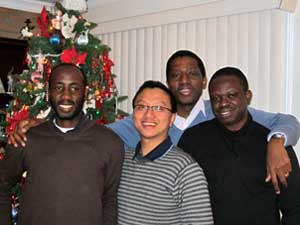 This September, CCAF was pleased to welcome the 2012-2013 international Fellows to Canada. During their nine-month Fellowship, they are studying Canadian practices and methodologies, primarily in the area of performance auditing.

Since their arrival, the four Fellows have been hard at work—they have each been assigned to an audit team at the Office of the Auditor General (OAG) of Canada, are participating in a series of professional development activities, and are preparing plans for performance audits to be conducted in their countries.

In December, the Fellows are returning home for three weeks. They will hold meetings with their auditors general and senior managers at their SAIs to provide an update on their Fellowship and discuss the development of their audit plans.

Freddy Ndjemba - Cameroon
Freddy joined the SAI of Cameroon, le Contrôle Supérieur de l'État (CSE), in 2007 as an auditor. He is working in the follow-up unit and has completed nearly ten audit missions. He is also a member of the working group in charge of developing the strategic plan of the CSE. Freddy graduated in economics (Master of Arts from the University of Clermont Ferrand in France) and in public administration (Bachelor of Civil Administrators from the National School of the Administration and Magistracy of Cameroon).

David Doe Amediku - Ghana
David holds a first degree in geodetic engineering and a master's degree in environmental resources management, both from the Kwame Nkrumah University of Science and Technology in Ghana. David joined the Performance Audit Department of the Ghana Audit Service in 2006 and is currently an Assistant Director of Audit. He has led several performance audit assignments, including the management of hospital waste, management of prison accommodation, and the utilization of the Minerals Development Fund. He previously worked at Watershed Ghana Limited (a land survey firm) as a project engineer and was also self-employed as a land surveyor.

Leonard Mabuga - Tanzania
Leonard joined the National Audit Office of Tanzania (NAOT) in 2010 under the Value-for-Money division, where he works as a performance auditor. He has so far carried out two performance audits, one on the Management of Police Inspections and Speed Limits and the other on the Management of Forest Products. Before joining the NAOT, Leonard worked briefly for the University of Dodoma in the Department of Admissions and for the Legal Assistance and Social Welfare Organization of Tanzania as a legal officer. He completed the Bachelor of Laws (LL.B) program from Tumaini University in 2009.

Le Hoai Chau - Vietnam
Chau joined the State Audit Office of Vietnam (SAV) in May 2011. He works as an auditor in the SAV's General Affairs Department. Chau graduated from the Academy of Finance in Hanoi with a bachelor's of economics in banking and finance in 2008. In 2010 he earned his master's of financial economics from the University of Leicester, in the United Kingdom.

CCAF and the Fellows would like to thank the partners who make the program a success: the OAG of Canada for hosting this year's Fellowships, the other audit offices and institutions in Canada who welcome Fellows for visits throughout the year, and the Canadian International Development Agency for its funding support. We wish our partners and all readers season's greetings and a happy new year.